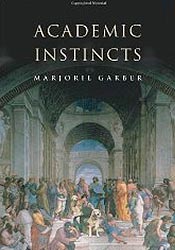 In this lively and provocative book, cultural critic Marjorie Garber, who has written on topics as different as Shakespeare, dogs, cross-dressing, and real estate, explores the pleasures and pitfalls of academic life. Academic Instincts discusses three of the perennial issues that have surfaced in recent debates about the humanities: the relation between “amateurs” and “professionals,” the relation between one academic discipline and another, and the relation between “jargon” and “plain language.” Rather than merely taking sides, the book explores the ways in which such debates are essential to intellectual life. Garber argues that the very things deplored or defended in discussions of the humanities can be neither eliminated nor endorsed because the discussion itself is what gives humanistic thought its vitality.

Written in spirited and vivid prose, and full of telling detail drawn from both the history of scholarship and the daily press, Academic Instincts is a book by a well-known Shakespeare scholar and prize-winning teacher who offers analysis rather than polemic to explain why today’s teachers and scholars are at once breaking new ground and treading familiar paths. It opens the door to an important nationwide and worldwide conversation about the reorganization of knowledge and the categories in and through which we teach the humanities. And it does so in a spirit both generous and optimistic about the present and the future of these disciplines.