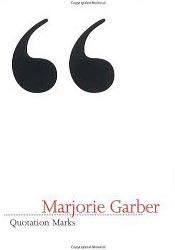 Once upon a time, the well-chosen quotation was a gentleman’s calling card, a sign of membership in an elite club; as Dr. Johnson expressed it, “Classical quotation is the parole of literary men all over the world.” Quotations were passwords, but they were also wisdom, of a sort. Because someone else had said them, they gathered a certain kind of authority.

For Winston Churchill, musing on his own indifferent prowess as a young scholar, Bartlett’s Familiar Quotations was an invaluable tool, an “admirable work” which he claims to have studied intently. The quotations, he felt, “give you good thoughts” and make you “anxious to read the authors and look for more.” Thus was a politician born.

In this collection of witty and trenchant essays Marjorie Garber explores the function of quotation marks, visible and invisible, in framing, conveying, resisting, or querying what we have come to think of as wisdom. The title essay discusses the odd circumstance of speaking in quotation marks, from the double-finger-squeeze gesture on the podium to the unexpected voices of Keats’ oracular urn and Poe’s uncannily iterative raven. Garber ponders the odd careers of words that seem to carry their own invisible quotation marks, from “fashionable,” a word it has become fashionable to employ as a standard dismissal of critics deemed too clever for their own good, to the title “Ms.,” which, while it was coined as a way of eliding certain categorical divisions among women, in fact wound up by creating more, and different, categories for women to choose among. Other essays engage words that seem to require a set of qualifying quotation marks, as with the ubiquitous “compassion” or the problematic “human nature,” which is now a term more comfortably employed by scientists than by humanists. From famous authors like Jane Austen and Shakespeare to sequels, puns and citations, Quotation Marks offers a fascinating (and often unexpected and hilarious) account of the role of quotation, misquotation, and example in literature and culture today.