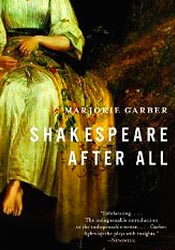 In Shakespeare After All Marjorie Garber – professor of English and director of the Humanities Center at Harvard University – gives us a magisterial work of criticism, authoritative and engaging, based on her hugely popular lectures courses at Yale and Harvard over the past thirty years. Richly informed by Shakespeare scholarship of the latter half of the twentieth century, this book offers passionate and revealing readings of all thirty-eight of Shakespeare’s plays. In chronological sequence, from The Two Gentlemen of Verona to The Two Noble Kinsmen. With erudition lightly carried, Garber illumines the overarching patterns and lush details of the plays, closely attentive to what matters most in Shakespeare: language, theme, plot, and character.

Here are fresh meditations on plays we have come to know and love, such as Hamlet, King Lear, Macbeth, Othello, The Taming of the Shrew, Romeo and Juliet, The Merchant of Venice, and The Tempest, and fruitful engagements with others not often read or produced – Henry IV, Parts 1, 2 and 3; The Merry Wives of Windsor; King John; Timon of Athens; Pericles; and Cymbeline. Garber affords us a rare chance to trace Shakespeare’s stylistic development as a writer of verse and prose, an artful designer of dramatic scenarios and revelations, a masterly sketcher of woman and man, and a keen observer of society high and low.

Complete with a comprehensive introduction to Shakespeare’s life and times and extensive bibliography, Shakespeare After All is a landmark work that enlarges our understanding of the most celebrated writer of all time.

Praise for Shakespeare After All