Dream in Shakespeare: From Metaphor to Metamorphosis 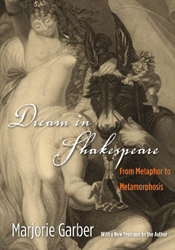 Dream is a central image for Shakespeare, encompassing at once the terrors of the irrational and the creative powers of the imagination – man’s deepest fears and highest aspirations. In this illuminating study, Marjorie Garber skillfully charts the development of Shakespeare’s use of dream to represent subjective events within the framework of the drama. Used in the early plays as a verbal or structural device, dream becomes, in the tragedies and late romances, a transforming experience which leads the dreamer toward a moment of self-awareness.

After examining the climate of dream belief in the Renaissance, Garber proceeds to a largely chronological view of the plays, describing the Shakespeare dream world – a world peopled by ghosts and witches, fairies and spirits and governed not by reason, but by omen and prophecy, vision and daydream, coincidence and disguise. This dream world is shown to be a key indicator of symbol and meaning, sometimes even a metaphor for the plays themselves. By the time of the romances, dream world and dramatic world are virtually indistinguishable, and the vision of life as a dream achieves its fullest reality.

Drawing on the works of Freud and other psychologists, but basing its argument on the language and dramatic structure of the plays themselves, Dream in Shakespeare presents a coherent and innovative reading of the plays and their developing concept of dream.